Skip to navigation | Skip to main content | Skip to footer

The Lived Experience of Climate Change: A Story of One Piece of Land in Dhaka

This project builds awareness and action on the ‘everyday’ realities and impact of climate change on the lives of low-income people in Dhaka through interactive theatre performances, documentary film, educational programmes, and public events.

As part of her research on urban climate change resilience, Dr Joanne Jordan spent months in an informal settlement in Dhaka talking to over 600 people in their homes, work places, local teashops, and on street corners to understand how climate change is linked to or creating problems in their ‘everyday’ lives and how they are trying to find solutions to those problems.

With the research complete, she teamed up with the Department of Theatre and Performance Studies at the University of Dhaka to explore the findings through a ‘Pot Gan’, a traditional folk medium that combines melody, drama, pictures and dancing. The Pot Gan is not a static piece of theatre; it is an interactive event that challenges the audience to actively engage with the personal experiences of informal dwellers affected by climate change.

Performances of ‘The Lived Experience of Climate Change: A Story of One Piece of Land in Dhaka’ have been seen online and in-person by over 7,000 people, including: informal dwellers, policy makers, practitioners, academics, students, and key publics. Live performances have taken place in Dhaka at: 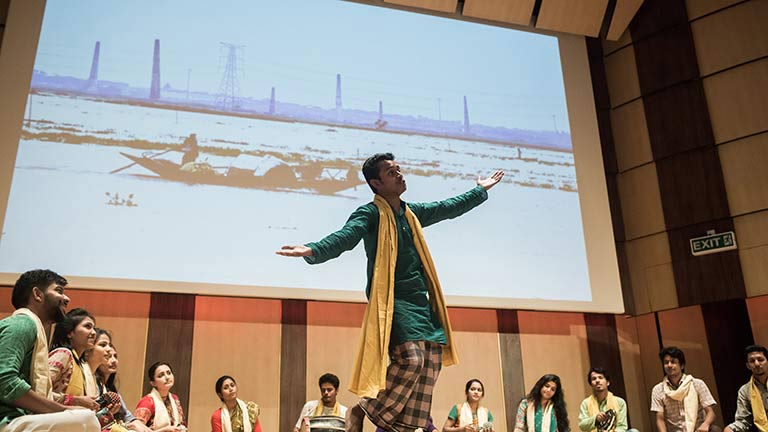 To bring the stories from the Dhaka informal dwellers to an even larger international and national audience, the Pot Gan performances were filmed to produce a documentary exploring Dr Joanne Jordan’s findings on the ‘everyday’ realities of climate change in 2016. The documentary ‘The Lived Experience of Climate Change: A Story of One Piece of Land in Dhaka’ was produced and directed by Green Ink, a Dhaka based new media studio specialising in documentaries.

To accompany the documentary, a mini film series ‘Living on the Frontlines of Climate Change’ was launched in summer 2018. In this, informal dwellers from the project field site directly convey their own stories and experiences.

Via educational programmes, the project engaged with students based in Bangladesh, the UK, and Ireland. The project worked with the University of Dhaka to integrate the performance theatre project into their MA programme, whilst also developing teaching resources for Secondary school Geography teachers  in the UK and Ireland, using video outputs from the project as teaching resources for MSc programmes at the University of Manchester, and working with Year 13 BTEC Performing Arts students from Regent’s High School in London to re-enact key scenes from the theatre performance in public events in the UK.

Read more about the engagement activities and impact in the project report:

The Documentary – The Lived Experience of Climate Change

Audience Viewpoint of the Pot Gan

Mini Film Series – Living on the Frontlines of Climate Change

This work is being led by Dr Joanne Jordan. It is funded by the Royal Geographical Society (with IBG) with an Environment and Sustainability Research Grant (Grant ESRG 6/15), the Arts and Humanities Research Council’s Research in Film Award, and several grants from The University of Manchester, including: Faculty of Humanities Strategic Investment Research Fund, Social Responsibility Research Stimulation Fund, Research and Impact Stimulation Fund and Higher Education Innovation Fund: Eco-voucher award.